EACH IN THEIR OWN ORDER 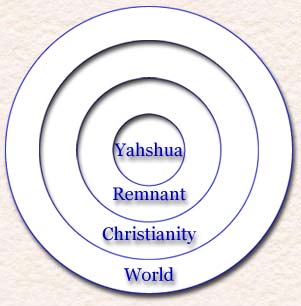 Each successive planting results in an ever-increasing harvest. Yahshua is only one, the two-part Remnant is a small beginning, but with each increase the harvest becomes ever larger!

What must take place after Christianity is finished being sown into mankind over the next 3,000 years? Christians must then receive their heavenly-born bodies.

When Christianity enters into incorruptible bodies, there will then be two companies who will have entered into these heavenly-born immortal bodies - the first resurrection two-part Remnant, as well as Christianity. This is the holy of holies and the holy place of Yahweh's two-part temple. But as a result of Christianity being sown into the world, the world will be saved, even as Christianity was saved by the Remnant's sowing, thus affording Yahweh His outer court. In each case, the former is sown for the sake of the next:

Let us illustrate this process in the following way. What we see in this illustration is that the preceding work is sown into the one that follows - Yahshua into the Remnant, the Remnant into Christianity, and Christianity into the world - with the outcome that at the harvest of the latter, the former "seed crop" is then caught up into heaven to be "born from above," having completed its intercessoral seed work, even as did Yahshua 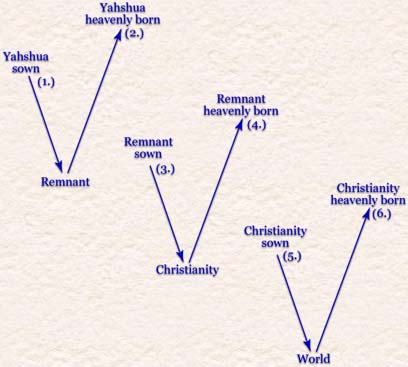 We find in the Scriptures that these various resurrections are enumerated in different ways. Sometime one resurrection is cited, sometime two, most often three, but sometime even all four. Let us see what we mean by this. We will begin with a reference to what Revelation 20:4-6 identifies as the "first resurrection" of man, but included is Yahshua's preceding initiating resurrection as well.

Thus we see that one man, Yahshua, was the initiating first man to enter into resurrection. He was the first fruits of resurrection. But the next verses do not address all of the resurrections that follow; instead, they only consider those who will be in the "first resurrection" - the resurrection of the two-part Remnant. These will reign with Yahshua for 1,000 years in the Millennium at His coming, and are addressed in these verses in such regard. Let us continue reading.

The two-part Remnant will reign with Yahshua during the Millennium when He will sit on the throne of David here on earth, abolishing all presently existing "rule and all authority and power." So here in 1 Corinthians 15 we see the initiating resurrection of Yahshua, the first fruits, followed by those who accompany Him at His coming - the "first resurrection" two-part Remnant.

Obviously, with these two resurrections not all are "made alive," for there are a host of others who must equally join Yahshua and the Remnant into resurrection. In what order will they join them? In the order we have already addressed in this writing, and as we will now see confirmed in other revealing patterns as well.

The two preceding resurrections of the Remnant and Christianity, composing the two-part temple, must then be followed by the third resurrection of the nations, adding the outer court. The first two resurrections comprise the church, the kingdom of God, the bride and the groom, the olive trees and the lampstand, the works that are not by might nor by power but by Yahweh's Spirit. These are the two works measured here; and the nations were not measured, though obviously given a place around the temple/the church.

And as was just eluded by the identification of these two works as being the bride and the groom, this wedding of the two must also have its many guests. Though these guests are not measured as a part of the uniting bride and groom, they nonetheless must be brought into the temple proximity, and in time will enter into their own resurrection. The nations, though not a part of the temple, are given the rights to the outer court - "it has been given to the nations." In their own order, the nations will likewise enter into immortality, completing the temple area by adding the necessary outer court.

These three resurrections follow three distinct and feast appropriate harvests as well: the first resurrection Remnant barley harvest, the second resurrection Christianity wheat harvest, and the third resurrection nations grape harvest. The Remnant barley is separated from its chaff with light abrasion. On the other hand, Christianity wheat is more tightly attached to its chaff and must be beat in order to separate it. Then finally, the nations grapes must be crushed and trodden under foot in order to complete their harvest. Thus here we see barley, wheat, and grape resurrections.

And let us recall the three resurrections we began this with - the holy of holies, the holy place, and the outer court resurrections.

Yahweh thus provides us consistent, repeated, testimony upon testimony of these three resurrections of mankind, each in their own order.