The First Woman To Vote: How the Woman With the Little Pail Leavened America 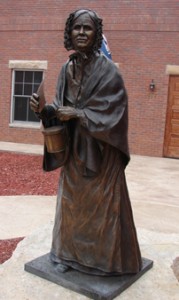 It was September 6, 1870, and a little old lady, now seventy, placed a clean apron over her housedress and prepared to go on two important errands that morning. Before she walked out the door, she picked up a little tin pail to take with her.

The streets of Laramie were dusty as usual, and the weather was beginning to change, becoming much cooler. At the age of seventy her pace was slower, giving her time to think. All these years as a Quaker, she had known the freedom of being equal as a woman in her church, having the right to speak or preach, and even to be an acknowledged minister if she had wished.

But the world around her didn’t move as fast in these ideas shared by her Quaker friends. There were others who felt as she, like the passionate Quaker sister she had heard about who was beginning to get a lot of attention—Susan B. Anthony. Anthony was demanding equal rights with men, even the equal right to vote! Just the year before, Anthony had joined with Elizabeth Cady Stanton and formed the National Women’s Suffrage Association. Can you imagine, she thought, a national women’s suffrage association!

Also, just a year before, Wyoming had become a territory of the United States; and what began as a publicity stunt in order to attract attention (and carried out as little more than a joke, even with the expectation that the Governor would veto it), the Wyoming legislators actually passed a bill on December 10, 1869, granting women of Wyoming the right to vote. As a surprise to everyone, the bill actually became law. The right for women to vote in Wyoming was the first of its kind. My, how times were changin’! And here she would be participating in this first ever opportunity for women! Wouldn’t her Quaker father have been proud of her?

When she entered the “old blue front” building, she sat her little pail down and completed her ballot, handing it to the town clerk. What a day, what a wonderful day, she thought! Finally, at the age of seventy she was able to vote in the United States under laws guaranteeing women political equality.

Following a polite exchange with the clerk over this matter, she once again picked up her little pail to now complete her second and final errand. This took her to the bakeshop. With pride she shared that she had just voted, and asked the clerk if he would please give her some leaven in her little pail.

Upon returning home, she sat down at the kitchen table, placing her pail in front of her, its purpose now being fulfilled. She had finished her chores for the morning—having voted in the first-ever election of its kind for women—and brought home her leaven. She even wondered how this historic event would change the future. Would Anthony actually be successful? Would all women in the United States some day really have the right that she had just experienced? How would this change our nation? For the good, she was certain. But she was seventy now, and knew that she would not live long enough to know the answers to her questions.

Being a good Quaker, she would often sit there at the table and read her Bible, and looked down at the page that was opened before her. Her eyes fell on a passage in Matthew 13, verse 33, the words of the Son of God: “The kingdom of heaven is like leaven, which a woman took and hid in three pecks of flour until it was all leavened.” This puzzled her; and she thought about it. But she was seventy and knew she would never know the answer to her question. So she arose and placed her leaven in the cupboard of her home to be used for another day.

Louisa Ann Swain was the first woman in the United States to vote under laws guaranteeing women political equality. There is a statue in downtown Laramie depicting Mrs. Swain with her little tin pail. It is not without prophetic meaning that after she voted, she purchased leaven to take into her home. This is precisely what has happened through women’s suffrage, evidenced by the first woman to vote. When women received the right to vote, they leavened the home, even leavened the nation and the world, just as surely as Yahshua said that the leaven of the woman would leaven the kingdom of heaven.

And it is not without prophetic meaning that she was seventy—the number of years the inhabitants of Jerusalem were put into bondage by the Babylonians, and the same age of Abraham when he entered a period of 430 years of bondage to Egypt that carried over to his offspring. This is what has taken place in this nation by giving women the right to vote—we have been taken into a bondage that has destroyed the American family and advanced moral corruption beyond that which Mrs. Swain could have ever imagined! And even as the sons of the King of Jerusalem, King Zedekiah, were slaughtered and the King himself had his eyes put out by the Babylonians, so our sons have been slaughtered and the eyes of the leaders of this nation have been put out, and they do not recognize the terrible error they have created.

Fifty years after Louisa Swain’s historic vote, on August 18, 1920, even greater history was made. Susan B. Anthony’s labors did come to fruition when on that day the Nineteenth Amendment of the United States Constitution was ratified, giving women the right to vote. Most people have the opinion that this was a good thing; but almost ninety years of history since starkly tell us otherwise! My book, The Curse of 1920: The Degradation of Our Nation in the Last 100 Years, reveals that on that fateful day of August 18, 1920, this nation was thoroughly leavened, and destined to corruption equal to that warned of by Yahshua concerning the leaven of the woman—“it was all leavened”!

What began as a joke, has become a sad and entirely destructive reality. The joke is on us.