Arresting Our Fate Under Feminism, 3 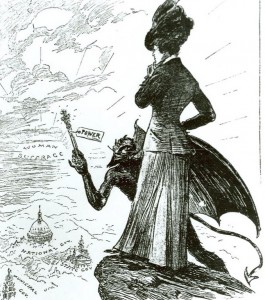 Part 3 of 3
But let’s now take this aberrant Eveonian social matter one vital step further. Let’s say that America wakes up and repents of her grave error and reverses this insane practice of coeducation facilities for young men and women and unnaturally extending education – then what’s next for them? These same young men and women, many who marry, will then go into a work environment equally ordered by the Eveonian women’s rights movement where men and women are placed together in sex-charged, glamorized working environments that are ripe for the occupational hazard of having an affair.

In 1900, women made up only 18% of this nation’s workforce, and the divorce rate was 0.7 divorces per 1,000 population (55, 751 divorces). But by 1947, because of World War II, women in the workforce increased to 28%, and the divorce rate more than tripled to about 2.5 (around 349,000 divorces)! By 1980, 42.5% of the nation’s workers were women, and the divorce rate continued to rise with these increases to almost seven and one-half times that of 1900, or 5.2 (1,182,000 divorces)! In 2006, the number of women workers was 46% of the workforce, but the divorce rate had decreased to around 3.6. Unfortunately, much of this decrease was due to the dramatic decrease in marriages and increase in live-in relationships. In 1980, the marriage rate was 10.6; but by 2006, that rate had fallen to around 7.5. Thus, we see clearly evidenced that as women entered into the man’s world of laboring outside the home, the inevitable outcome was the home’s destruction!

Of course there are other contributing factors for this elevated divorce rate, including the feminization of our court system and divorce laws that invite women to file for divorce and extort their husband’s accrued wealth and take his children. Tellingly, three-fourths of all divorces are filed by women! Our nation has evidenced the tragic transformation from a patriarchal system given to us by our forefathers – (1) the supremacy of the father in the family, (2) the legal dependence of wives and children, and (3) the reckoning of descent and inheritance in the male line – to becoming a destructive and usurping matriarchal system decried by our forefathers.

Many years ago in a very common way I learned a very important truth, and that is: familiarity leads to error! The more familiar or casual one becomes with a situation or individual, the more likely they are to err. Having a familiar or casual relationship drops essential defenses and respect for proper governmental order and lines of separation, and thereby must be guarded. Likewise, it is only natural that the more one is exposed to temptation, the more likely they will succumb to it. In their Eveonian desire to be equal with men, the women’s rights movement expanded women into the workforce, as well as into education, with the same ill results that Eve brought – destruction!

Another founding father, Thomas Jefferson, the principal author of the Declaration of Independence and our second Vice President and third President, had much to say concerning the proper role and place of women. During his time, America wisely had strict lines of distinction between the sexes – in society, in education, and in government. When Jefferson was an envoy to France, he wrote Washington concerning the deplorable state of casualness found in that country:

The manners of the nation allow them [women] to visit, alone, all persons in office, to solicit the affairs of the husband, family, or friends, and their solicitations bid defiance to laws and regulation…[Few Americans] can possibly understand the desperate state which things are reduced in this country from the omnipotence of an influence which, fortunately for the happiness of the sex itself, does not endeavor to extend itself in our country beyond the domestic line.

Today, this rightly observed separation is tragically violated. Jefferson objected to the entrance of women into the role of government and governing, clearly stating that in order “to prevent depravation of morals and ambiguity of issue, [women] could not mix promiscuously in the public meetings of men.”

Again, what is the trinity of truth? Wisdom, understanding, and knowledge. Here we find clearly stated the wisdom of our founding fathers – that women promiscuously mixing with men in government, education, or work, causes “depravation of morals and ambiguity of issue”!

This is in every regard the exact ill fruit we so fully see evidenced today, concerning which Jefferson forewarned. Our government has become feminized, and thereby is a dismal bloated distracted failure. Our places of work have become weakened and distracted and just as much a threat to the family and the home as our coeducation facilities of secondary and post-secondary education. They are two of the same thing. Whether it be in the home, in the schools, in the workplace, in government, or in the church, equality for women is entirely destructive in its effects, causing ambiguity in issues that are vital to this nation’s wellbeing, and the depravation of morals that Washington and Adams warned are indispensable. Clearly, the Eveonian women’s rights movement has been the single most causative factor in our nation’s demise. The curse of the woman desiring the place of the man has once again effected its death!

The trinity of truth is wisdom, understanding, and knowledge, and wisdom tells us to listen to Washington, Adams, and Jefferson, thereby to gain understanding, and with true knowledge to change both our educational institutions, as well as our workplaces. In short, women need to return to their homes and be faithful wives and mothers. As stated earlier, the Eveonian women’s rights movement is the most destructive and greatest enemy to mankind on the face of the earth, and it must be reversed! Any nation that fails to seek religion and morals first will fail! That is our course, … and our fate – unless we change!

If you think America is doing so well as a nation and that none of this moral junk or these chauvinistic concerns about feminism are relevant, you have your head in the clouds. Once again from the wisdom of Solomon we read, “the borrower [is] servant to the lender” (Proverb 22:7). The United States is clearly the servant to others who are in fact more righteous than we. The U.S. debt at this time (2008) is $9.2 trillion, $500 billion more than last year, and is on a steeply escalating course!

Much of this debt is owed to nations like Japan, China, and Saudi Arabia. Look at the moral values of China. They at least seek to control the propagation of lewd behavior. Look at the moral values of Saudi Arabia. They have clear lines of distinction between men and women and have high standards of modesty and intolerance for crime and immorality. Likewise, Japan is more righteous than we. If America is so great, then why is it that we are debtors to these nations that are so much more righteous than we? God has favored these nations and we in feminized America are now their slave. And if any of these nations chose to call in their notes, our economy would crumble like a house of cards! The mere mention of such an act causes seismic shockwaves on Wall Street, dropping the Dow like a lead balloon.

In conclusion, once again we turn to the wisdom of a founding father, Thomas Jefferson. May we – we must – uphold the principles and truths delivered to us by these men, including preserving the line of distinction between men and women. And let it be noted that it is not without meaning, and something we should earnestly take to heart, that America had no founding mothers. Neither are the Patriarchs of the Bible nor in any great religion women. Nor were any of Yahshua’s twelve disciples women. We have abandoned the ways that were given to us in wisdom. Therefore, Jefferson soberingly forewarned:

And can the liberties of a nation be thought secure if we have removed their only firm basis: a conviction in the minds of men that these liberties are the gift of God? That they are not to be violated but with His wrath? Indeed, I tremble for my country when I reflect that God is just; that His justice cannot sleep forever.