Heal Your Own House, America: First Remove The Log 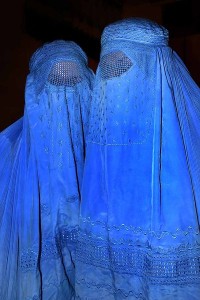 America, before you go to remove the speck from the eye of other peoples and nations, first remove the log from your own eye that is blinding you to your own deplorable moral, social, and civil state.

You have no right to point to the Taliban with their extreme practice of women wearing burqas, when you evidence an even more destructive and deplorable extreme practice at the other end of the spectrum in nudity and immodest sensual dress and behavior among women. You are hypocritical! You condemn one extreme, and practice the far worse opposite extreme. You condemn excessive erroneous modesty, and practice excessive erroneous immodesty, which is far worse!

You boast that you are a Christian nation, when you fail to practice Christian principles and teachings such as men being the head of the home, no divorce (except for infidelity), no unwholesome word coming out of your mouth, modest dress, women covering their heads when they pray, women not assuming a teaching or leadership role in the church, in like manner women rejecting the Eveonian practice of participating in civil governance in violation of that which our forefathers delivered to us, and finally, not committing murder when you murder 3,500 babies every day!

You are self-righteous to criticize and condemn the Muslim and the Taliban, when you are so guilty of the opposite in sinfulness and licentiousness. The stark reality is that the Muslims are more righteous than you! What right then do you have to judge them?

You object to Afghanistan growing poppy, when you are the ones buying and consuming it. You object to those who practice circumcision of girls, when in America one out of four teenage girls, and nearly half of all black teenage girls, contract a venereal disease that causes cervical cancer. Where is our shame and embarrassment and even correction as a nation?

You object to and belittle the practice of peoples who have arranged marriages with divorce rates as low as two percent, when among you live-in relationships are both common and accepted, and your divorce rate is among the highest in the world – over fifty percent! In fact, the divorce rate of Protestant Christians in this country is higher than the divorce rate of atheists! So where does the problem lie? Squarely in this nation’s hypocrisy!

Heal your own house, America, before you criticize others. You need to solve your own massive social, moral, civil, and religious problems first and foremost, before you consider pointing a finger at anyone. As Yahshua said regarding such hypocrisy, first remove the log from your own eye, for only then will you have the clear sight to remove the speck from the eye of another. And most certainly, when you remove the log from your own eye, you will see that some of the practices of others are not even wrong, but actually right and good.

You object to China exporting toys into this country because the lead content of the paint might harm our children, yet parents provide music and entertainment that harms far more than their bodies, corrupting their spirits and their souls, exacerbating our nation’s moral, social, and civil problems. You demand women’s rights in other countries, when the selfsame Eveonian movement here is destroying education, wrecking countless families, killing 3,500 babies every day, and has led to government spending that will implode our nation’s finances and economy.

You react with disdain when you hear of honor killings by Muslims, yet you have the blood of 3,500 innocent babies every day on your hands. Irregardless of your opinion of honor killing, there are some things that are worse than death. As a Christian, Paul turned a man over to Satan to kill him, that his soul might be saved. Paul did not kill him directly, but his intent was nonetheless the same. The same God who instructed children to honor their father and their mother, also required that if they struck their parent or rebelled, they were to be killed. And if a spouse committed adultery, they too were to be killed.

Who then can be so quick to condemn the Muslims? At least they have a zeal for God and righteousness and family honor, things that this nation has deleteriously and shamefully forsaken. The fact is that this infrequent practice is wholly dwarfed by the number of abortions of innocent children that are performed simply out of convenience. And many of those honor killings are the product of the corrupted culture that America markets and Muslim families wholly reject. So we then ask, who truly kills them, the one who throws the stone, or the ones who lay the stumbling stone?

Look at America before 1920 when the Curse came upon us, and you will see from whence we have fallen and have shamefully departed. Americans have slipped away from those things which were long held so dear. Yes, the seeds of corruption had already been sown, were growing, and would bring us to the debased state we are in today; but at least the women still dressed modestly and exclusively wore long dresses. Even the Eveonian feminists regarded abortion to be reprehensible murder. And women at least wore hats (the corrupted remains of headcoverings) as a covering on their heads; and the idea of women wearing pants or smoking was a matter of public ridicule. Women were instead honored as homemakers, housewives, and mothers. A man would take his hat off and open the door for her, stand up when she entered a room, and do likewise when she left. Where is that deserved honor today?

“Tolerance” was regarded as evil, destructive, and shameful compromise. Swimwear completely covered the bodies of both men and women. Out-of-wedlock pregnancy was a social shame and stigma to be avoided. Families were intact, including the now-destroyed black families. Entertainment and recreation were wholesome. Courtship was a formal part of a relationship before marriage. Churches and the press would oppose and speak out against the oncoming corruption of jazz music that was being fostered in dark marijuana-smoke-filled brothels and bars. Men looked like men, and women looked like women; and homosexuality was an offensive and repulsive covert act. And yes, the cost of government was still very much limited, yet poised for the skyrocketing effects of women’s suffrage.

If all of these virtues that were practiced by the people of this nation for over 300 years meant nothing, the very virtues that formed, birthed, and matured this nation as a product of the Age of Enlightenment and religious devotion, why then did they faithfully practice them? One must ask the question why these formative generations indeed followed these virtuous and responsible ways. And why, therefore, was it that the less modesty Americans evidenced in their dress and behavior, and the less women dressed like women and began dressing and acting more like men, the more we experienced the ever-encroachment of our present depravation?

This nation will not be morally virtuous until a proper outward appearance is restored that history has shown matches an inner moral position. Our outward compromises in virtuous appearance, are a reflection of our inward compromises in virtuous principles and practices. We as a people no longer seek these higher qualities, and will thereby most certainly destroy us. We are a nation with no shame or moral constraint, and we cannot compromise forever!

We would thereby be wise to heed the words of Thomas Jefferson, who forewarned: “Indeed, I tremble for my country when I reflect that God is just; that His justice cannot sleep forever.”