CPS Gets a Much-Needed Black Eye in Texas 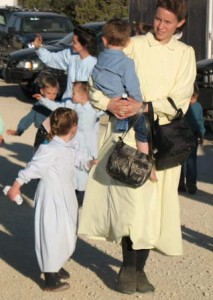 As a Texas-born, Texas-reared, Texas-graduate man who saw his five children born in Texas as well, I have an affinity for the lone-star state. But I must say, while the assassination of JFK was an embarrassment, and the tragic handling of the Waco Branch Davidian standoff was both sad and shameful, what Texas and Child Protective Services (CPS) did at Yearning For Zion Ranch (YFZ) makes me glad I’m not in Texas anymore. The only redeeming value of this unjust invasive attack against 465 children and their families, is that the state’s appellate court and supreme court will give CPS, and Texas, a much needed black eye.

Texans have a saying that is undoubtedly not unique to this wild-west state with its bold, in-your-face litter motto—“Don’t mess with Texas.” That saying is this: Give a man enough rope and he’ll hang himself.

This is, once again, exactly what Texas and CPS have done. They didn’t learn from the like invasion of the Short Creek, Arizona, FLDS community in 1953. And clearly they didn’t learn from Waco either. Furthermore, the state of Texas obviously failed to read Georgia State Senator Nancy Schaefer’s 2007 report, concluding that CPS “has become corrupt and that the entire system is broken almost beyond repair,” that it “obliterates families and children simply because it has the power to do so.” This acuminous conclusion is sadly repeated time and time again throughout this nation, begging the question: How much longer will this dubious agency be left unchecked?

Likewise, the state of Texas could have learned from the 1994-95 CPS debacle in Wenatchee, Washington, costing $10 million in civil rights violations afterwards. And hopefully, though unlikely, after YFZ is all over, this nation will finally get wise to the out-of-control destructive effects of this rogue agency that destroys thousands of families.

The initial raid on the YFZ Ranch had a Texas-size price tag of $5.3 million, plus $2.2 million for the local courts, and they anticipated $1.7 million a month for the children’s “care.” Of course the state of Texas then began to count their pennies, trying to figure out where they were going to get the $30 million needed to pay for this debacle for this next year. Ingenious solution: the state Senate finance panel suggested they take the money from the FLDS. Let’s see, you take their children by armed force under a bogus pretext; you lie to the families on repeated occasions and threaten them; you separate and disburse their children throughout this vast state; you set up court proceedings that have been determined to be not only legally and factually inept, but were also impossible to conduct; and now to pay for this insidious injustice you brought against them, you take their homes, property, and finances. Waco was a lot simpler.

Texas and CPS, you will deserve every single lawsuit for civil rights violations that are filed against you. You intolerantly raped these peace-loving people in every way, and would have done even more if you could have, and you deserve whatever legal retribution you will receive from this.