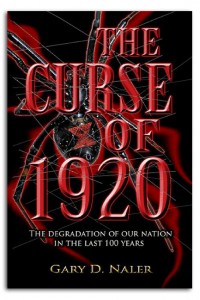 Finally, conservative commentator Ann Coulter has someone to agree with her after making her outlandish comment regarding her “pipe dream” that we take “away women’s right to vote.” Yes, there is now a book out that espouses this same prescription. With its equally controversial message, it has the intriguing title, “The Curse of 1920,” and is authored by former advocate for the poor, Gary D. Naler.

As if stirring up the dead, the publication of this book even provoked the great-great granddaughter of Elizabeth Cady Stanton, 19th century suffragist and godmother of women’s rights who is often quoted and cited in the book, to ask: Who is this Gary Naler.

Movie critic and talk show host Michael Medved said that this “could be the most controversial book of the year.” “Lavishly controversial,” he added, “very provocative, inflammatory in fact!” There is no question—Medved is accurate here.

Naler even has the audacity to publish a report card on the women’s rights movement and give them “F’s” in every subject. The reason? He sites the following resulting negative impacts on society: immediate burgeoning increases in the costs and size of government, converting our original patriarchal government into a matriarchal nanny state, costly welfare and the destruction of the black family and traditional values, escalating divorce rates with the resulting destruction of lives and financial security, destroying stable family government, confusion of the sexes, failure of our educational system, dramatic moral declines, the abortion of 3,500 babies every day, and more.

This 320-page book is not just the rantings of a madman. Medved acknowledges that it is “well researched,” a “provocative prescription for our present perplexities.” Naler quotes from Adams and Jefferson, to godmother Stanton; from Blackstone’s Commentaries in the 1760s, to recent research at the University of Chicago School of Law. And charts and statistics are as prevalent as in any corporate boardroom when insolvency looms on the horizon.

Naler argues that a three-pronged curse came on America in 1920: the “Eveonian” women’s rights movement (which he cleverly dates back to Eve); jazz, rock, and rap music; and abortion. But there is no question that he sees the greatest guile in the women’s rights movement, stating that it is “the greatest enemy to mankind on the face of the earth!”

“Women’s suffrage began in 1920,” notes Naler, “and our nation has been suffering ever since.” Most certainly, “The Curse of 1920” determinedly seeks to make Ann Coulter’s pipe dream a reality.