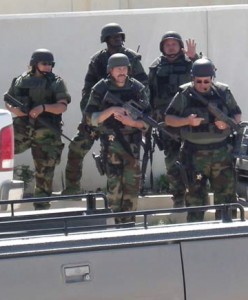 You can always know when someone is doing wrong when they have to exaggerate the facts in order to justify their actions, e.g., Waco, Texas, 1993. When you read the accounts of what is taking place surrounding the Yearning For Zion Ranch near Eldorado, Texas, reporters cannot call it a ranch or community, they cannot call the people mere members or residents or congregants, or say they are a group immersed in strict religious principles; but instead, they have to use inciting words such as cultists, clan, the compound, sect, fear, cyanide document, renegade. Clearly, the reporters are on a witch-hunt and purpose to demonize the group and place it in a notoriously bad light—calling into question the intentions and purposes of both the raid and the reporting.

Even the basis for the raid is bogus. Supposedly a young girl of sixteen by the name of Sarah who was pregnant with her second child, called in about being beaten, choked, and forced to have sex with her fifty year old “spiritual husband,” Dale Barlow. Of course this could not be reported as just a phone call, but to maintain the sinister appearance had to be reported as a “whispered telephone call.” But the problem is that the call now seems to be entirely bogus. There is no Sarah, and Dale Barlow is not a suspect. The entire raid whereby 416 children were forcibly removed from their homes (not compound), along with 139 women who followed them, was based on a hoax, a setup.

For four years the sheriff said he has had an informant in the group, and even so in that entire time has never been able to find cause to file any action against them. And now, based on one solitaire bogus call, they sprang into action and forcibly removed 416 children from their homes. One bogus call and the removal of 416 children? Isn’t this Stalinism? Where is the justification for this heinous act?

Marleigh Meisner, a spokeswoman for the state Child Protective Services (CPS), said that the agency is working with mental health and other experts to make the transition to foster housing for the children. My own familiarity with this agency is that it is often completely unjust, inaccurate, and unaccountable for its frequent misdeeds. Here now is just one more gross example of this. How can one bogus phone call justify 416 children being taken from their parents and placed in foster homes? It inexplicably cannot! That which feminized divorce laws could not do to utterly destroy these families, the Attorney General and CPS have sought to accomplish.

Furthermore, Meisner said that mental health professionals have been brought in to ensure a sense of “normalcy” for the children. Normalcy? What normalcy? I in no way agree with polygamy, as it is clearly wrong and there are some huge issues to be addressed regarding it. But frankly, there is no difference between polygamy and serial polygamy when someone is married several times, also called serial monogamy, or even multiple live-in relationships. Clearly, there is more family stability and less ill social consequences in polygamy than in any of these other net-equivalent practices that are frequently and freely carried out. So the question is begged here: How can anyone justify this “normalcy” that Meisner and her “professionals” have to offer?

These children were taken from homes that were far more orderly, intact, and healthy than 80 percent of the homes in America. The mothers stay with their children, who are not ignored, when in Meisner’s world 75 percent of women work outside the home. So tell me then, who is better off and has more normalcy? In the Yearning For Zion Ranch, undoubtedly divorce is near nonexistent. But outside that intact environment in CPS-world, divorce occurs at a staggering rate of over 50 percent; 37 percent of all births are now out-of-wedlock, nine times greater than what they were in 1950; and the marriage rate is half of what it was as recent as 1970. Today, only half of America’s households are traditional two-parent families, and many of those are not even both biological parents. This is Meisner’s normalcy.

At Yearning For Zion, children are regarded as a reward and blessing and nary a child is ever considered to deserve that murderous act of being aborted in the womb; yet in CPS-world, one-third of all mothers have aborted their children, whereupon a staggering 3,500 babies are killed every single day. When in the wombs of their Yearning For Zion mothers, these now-abducted children were assured of having a safe and secure entrance into this world. So how is it then that CPS thinks they can provide like security when they now want to abort them from their mother’s care? They cannot.

The contrast of the dress of these modest women at Yearning For Zion and the immodest masculine appearance of the female authorities and staff who hold them hostage is stark. These mothers and daughters dress with dignity the way women used to dress before the Curse of 1920 when women began throwing off their modest appearance and taking on the appearance and the place of the man. And these mothers have every right to instill this virtue in their children. These ladies in fact put us to shame today, reminding us of what our nation once honorably upheld.

To bring these children into the CPS-world, do we now want them to have Paris Hilton and Brittany Spears as their role models and wear short skirts, revealing tops, and less-than-underwear swim suits, listening to some crude and repulsive rap artist? This is the normalcy CPS has to offer.

Furthermore, these children have never been exposed to the corrupting and deteriorating effects of television, entertainment, popular music, the internet, video games; and suddenly they would now face these, as though they are normal and right. Why do you think this group called their estate Yearning For Zion? They were not yearning for the attractions of this world, and it is both immoral and Stalinistic to take these children away from their parents and indoctrinate them into a culture that has failed in countless ways.

In Texas, a girl can marry at the age of sixteen with her parent’s written consent. When I married, I was at an age where I too had to have my parent’s consent. That was thirty-nine years ago and I am still married with five children. While Yearning For Zion should honor this marriage law, the fact is that there is nothing immoral about marrying at much younger ages. Our nation was built by families where girls would marry as young as fourteen. Even Mary, the mother of Yahshua, is believed to have been around the age of fourteen when the Holy Spirit impregnated her. And shocking to most, the patriarch, Isaac, married Rebekah when he was forty and she was a mere ten years of age. Can you imagine what the reporters would do with that one? So, this being immoral is not an issue.

Hypocrites make a big to-do about the marriage beds located in their temple, yet they have no evidence that they are used for anything other than honoring the consummation of marriage. The hypocrisy of these witch-hunters, these McCarthyites, is that they make exaggerated accusations against these people about the marriage beds, when Americans miserably fail to keep their own marriage beds undefiled—infidelity rates are as high as 50 percent and divorce at an equal rate. You hypocrites, it is every bit true: Why don’t you remove the log from your own eyes before you try to remove the speck from the eyes of the members of Yearning For Zion? Would that all marriages were held in such high esteem and the marriage bed be equally undefiled as these family-oriented people evidence.

It is reported, and is probably accurate, that the children are taught that they cannot trust anybody from the outside. Based on the shameful and disturbing state of America as revealed by these statistics, why should they tell them anything different? And based on this Stalinist raid where 416 children were forcibly removed from their homes and families based on a single bogus call, why should they believe anything less? And, based on what authorities did to them in Arizona in 1953 when a similar raid was carried out with public scorn, why indeed should they not trust the outside? And finally, with CPS’s history of shocking error in breaking up innocent homes, why again should they not trust the outside? The fact is, there is no wall keeping them in. Anyone who has wished has been free to leave. But they choose to be there, and to carry out this witch-hunt raid is shameful.

CPS’s Meisner said, “We want to keep their world as normal as possible. We also want to be certain that these children have gained a trust with us. We want these children to know that even if they may not have been safe in the past, they will be safe as long as they are with us.” The bigotry and blind error of that statement is astounding. CPS hides behind the guise of wanting what is best for the children, when they cannot provide it and will only harm them. This is America, Meisner, not Stalingrad, and these parents who are exhibiting more virtue than anything you have to offer are the only ones who have the right to make that decision.

To you and others, practice some much needed restraint, discretion, respect, and, yes, judgment regarding your own graver faults, considering the wisdom of Abraham Lincoln who concluded that to plow around such like-devoted people as these is the much wiser course.